In the southeastern corner of Arizona, along the edge of the Chiricahua wilderness, a massive oak tree grows along the breathtakingly beautiful banks of Turkey Creek.  The tree distinguishes itself by having multiple trunks that form a wide crotch in which, at one time, a flattish stone had been placed as a seat.  One enormous trunk has split off and fallen to the ground, where it remains, slowly returning to the earth.  The tree flourishes in its idyllic setting:  water is plentiful, the air is clear, and the unique history of this specific tree ensures a rare human guardianship.  This is the tree where gunfighter Johnny Ringo was found shot to death 130 years ago. 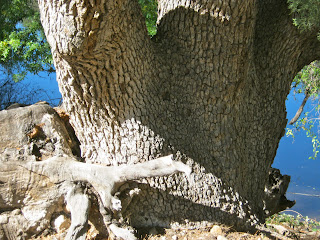 As with most, if not all, gunfighters, ascertaining the truth about Ringo is an impossible task.  Even the first-hand accounts of those who knew him were called into question, slanted as they were.  The events of Ringo's life are as debatable as the events of his untimely death.  Shaped into a heroic character in books such as Walter Noble Burns' Tombstone, acerbically dismissed in Jack Burrows' deconsecration John Ringo:  The Gunfighter Who Never Was, the actual figure behind the stories assuredly lies somewhere between hero and merely a remarkably unremarkable citizen of the times.

It is certain that, for whatever reason, the memory of Ringo remains sacred to those living in the west today.  From the jeep-tour driver in Cave Creek who changed his own name to Johnny Ringo in homage, to the writer (Burrows) who apparently dedicated decades to research in order to reduce Ringo's legacy to myth, people even today remain fiercely devoted to their view of Ringo's persona.

We walked, this week, the yards from Turkey Creek Road to the huge oak tree where Ringo's body was found.  By the graciousness of the Sanders family who still own the ranch where the death occurred, visitors may quietly and reverently visit the Ringo memorial.  It is not a touristy area; there are no paved lots, no public restrooms, and no gift shops.  Far from it:  there is a dusty road, with just enough room to pull over (not that you'd need to, as rural as the area is); a wire gate that sternly admonishes visitors "No Trespassing," while, a few feet up, a sign reminds us of the "rules," for visiting the site; and a rock-piled gravesite beside a simple historical sign and, of course, the oak tree above.  During our visit, not so much as another vehicle passed by, much less fellow visitors to the gravesite.  It is a site appropriate for a westerner's resting place:  still feral, if not wild; and within feet of that most-precious substance of desert life:  water.

Looking into the azure shallows of Turkey Creek, I couldn't help but think that, if Ringo had indeed committed suicide as the official coroner's report stated, he'd picked an utterly gorgeous location to do so.  His last view would have been one of tranquility, despite any inner turmoil he most certainly felt.  The Chiricahuas to the east are stunning, and although an Apache at the time might have looked at them as safe harbor, and a gunfighter in a bad situation might have viewed them as an inconvenience, if not a hazardous obstacle to his safe escape, both must certainly have recognized their grandeur at the same time.

Ringo, for those who have done little by way of research, was a gambler, cowhand, rustler, and (albeit briefly) a county deputy.  Although the Ringo legend attaches him to the conflict remaining after the shootout by the OK Corral, and he was credited with several unproven gunfights, it is certain that he was affiliated with many of the "elite" gunfighters and history-makers of the 1880's Arizona territory.  Ringo was involved in the Hoodoo Range War in Texas, and indisputably pistol-whipped and shot (but didn't kill) a fellow drinker at a Safford saloon.  His acquaintances included enemies (such as the Earps) to benefactors (for example, Sheriff John Behan) and fellow gunmen and friends (Buckskin Frank Leslie, John Wesley Hardin, Scott Cooley, among others).  Although the extent of his involvement in various conflicts remains unclear, he certainly knew well the major players of the time.  Ringo, by any standard, led an interesting life.

At only 31 years of age, on July 14, 1882, Ringo was found dead in one of the more bizarre death scenes of the time.  He was found facing west, sitting at the tree in the photograph above, with a bullet entry wound in the right temple and an exit wound in the top of his head on the left side.  His revolver, a Colt .45 holding five cartridges, was in his right hand; his Winchester 1876 was resting beside him against the tree.  Nothing points to an ambush, and Ringo was described as depressed in some accounts, but there are indeed some oddities about the death scene.  He wore two cartridge belts, and the revolver cartridge belt was worn upside down.  He was missing a part of his scalp (in a different location than the exit wound from the fatal bullet) leading some to surmise he'd been scalped.  He was barefoot, and had wrapped socks and part of an undershirt around his feet.  Much can, and has, been written about the theories of his suicide or murder (depending on which camp you're in) as well as controversial details about the scene, but I will not begin to debate them here.  Suffice it to say that no one can proclaim with certainty what did occur that hot summer day, beyond the fact that Ringo died by gunshot, nestled within a clump of oak trees, at that beautiful spot alongside the creek on a hot summer day.

Ringo was buried just feet from where his body was found.  Unlike many sites of interest related to gunfighters' deaths or burials, there's no disputing that Ringo is in the ground beneath the rocks shown here.  He did, indeed, die just a few feet left of the stone cairn in the center of the photo.  This location was near a major wagon road, used for logging and other freight; in fact, Ringo's body was found by a teamster driving through. 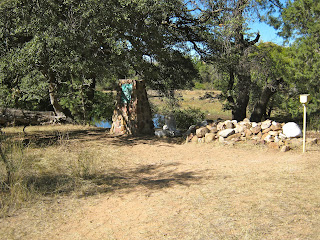 Today, his grave is scattered with quarters, left in tribute by those who visit his resting place. 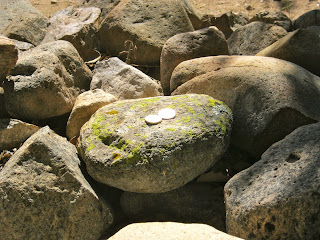 It is one of many ironies of John's death that everyone familiar with his legend wants to add their "two-bits' worth," and that even today, his grave is marked with "two bit" pieces. 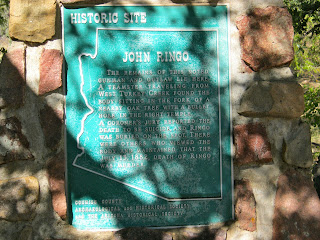