Klondyke, Bonita, and an Appearance by Billy the Kid

In the southeastern part of Arizona, nestled in the Aravaipa Valley and boasting spectacular views of the mountains, is a tiny townsite appropriately called "Bonita." Dad used to tell me I should visit Bonita - Spanish for "pretty" - because of the area's rich history. It took me a few years (decades, actually) but at last I made my way there this week.


We took the Klondyke Road from the highway that crosses the San Carlos Indian Reservation, continuing to Thatcher first to fuel up. The boulders and tors on the roadsides made for the type of scenery early movie directors sought for their westerns.  In this corner of the state, the real life western action actually happened: cavalry battles, gunfights, stagecoach robberies, manhunts.

Klondyke itself certainly has an element of western romance. Miners, fresh from the Alaskan gold rush, named the town in honor of their northerly pursuits. Not much remains of the town. Though it yielded little gold for its hopeful settlers, in the early 1900s it provided jobs for about 500 men in the molybdenum, lead, silver, and copper mines in the area. When the mines closed, the town closed too.


Ranches still operate in the area, but from the looks of the empty Klondyke School grounds, the children no longer study in the one-room schoolhouse. Curious cattle graze behind the school.

Either the dusty road was once surprisingly busy or someone from the Department of Transportation had a sense of humor.

Leaving Klondyke, as so many others did a hundred years before us, we headed southeast toward Bonita.

Before reaching the actual town of Bonita, we stopped at Bonita Cemetery, the last stop for local ranchers and cowboys.


In one corner of the cemetery is the un-named gravesite of a child. Family members have fenced in the plot and added heartbreaking mementos and personal effects.

The three empty swings swayed with the breeze, the bench behind them seemingly holding a ghost watch over the unseen children.


Meticulously tidy, lovingly maintained yet still part of the terrain, Bonita Cemetery has mountain views to die for. A person could do worse than end up in this quiet, lovely place.


Bonita is but a few miles from Fort Grant, once a cavalry outpost. Soldiers from the post frequented the watering holes at Bonita to blow off steam. Billy the Kid earned the first notch in his gun there when, in 1877, he killed a veteran of Fort Grant, a blacksmith from Ireland by the name of Francis Cahill. Local lore puts the scene of the killing behind the Bonita Store. After killing Cahill (who was known as "Windy" for his blowhard character), the Kid - then going by "Austin Antrim" - walked over to the Hotel de Luna and ordered a meal. The owner, Justice of the Peace Miles Wood, took Billy into custody at gunpoint and turned him over to officials at Fort Grant.

Billy, he of the infamously thin wrists and hands, slipped his handcuffs and escaped from Fort Grant. It was his slender physique and "dandy" city clothes that caused the unfortunate Windy Cahill to mock him and bully him, ultimately leading to Cahill's death. Before succumbing, Cahill said he'd called Billy a "pimp" and when Billy retorted with a profanity, Cahill pinned him down and began beating him. Billy was able to get to his gun and end the struggle. Cahill was buried at the Klondyke Cemetery.

Ironically, the former Fort Grant is now a correctional facility for juvenile offenders. The Hotel de Luna is no longer standing. The Bonita store, also once owned by Billy's captor Miles Wood, hadn't seen the last of its youthful escapees though - nor killings. In 1964, Miles Wood's grandson James DuBois killed a new business partner at the site in a case of mistaken identity. DuBois's wife Dottie found that a sixteen-year-old escapee from Fort Grant "industrial school" had locked their teenage daughter in one of the buildings and was attempting to coerce their other daughter to give him car keys. Dottie screamed for help and as her husband grabbed a gun and ran to her aid, his partner - Ernest Doyal - approached. In the confusion, DuBois shot Doyal, who died about fifteen minutes later.


Fenced and vacant, the Bonita Store bears no bronzed plaque to remind the occasional traveler of its fascinating history. The DuBois family no longer greets customers nor proudly shares the site's tales. There are no more area "hog ranches" - the pseudonym Fort Grant's soldiers used for brothels - where once there were several. The once-raucous Bonita is quiet, now.


Copyright (c) 2017 MJ Miller * All rights reserved * No part of this content, including photographs, may be used without express permission of the author * Links, however, may be freely shared and are appreciated * Thank you for linking, liking, forwarding, tweeting, sharing, and most of all visiting * For photo purchase or licensing, please contact the author *

Update!  Thank you to my friend, John Barto, for catching and correcting my erroneous wildflower identifications.  Corrected as of April 2, 2017.

Just a stone's throw from here on the ranch - that is, a stone thrown by a powerful volcanic eruption, perhaps - on the other side of New River Mesa is the stunning terrain cut through by upper New River along the Table Mesa Road. This time of year, the New River Mountains are swathed in yellow brittle bush blossoms and punctuated by an assortment of less-abundant wildflowers and cactus blooms. With generous rain recently, New River still has water pooled in areas and flowing in others.

Armed with a new ruggedized pocket camera (not by choice, but because my previous pocket camera wasn't ruggedized and couldn't stand up to being stood on) and a few essentials (including my ubiquitous travel mug of coffee), we took the Jeep east on Table Mesa Road scouting potential access to the north side of New River Mesa in the future.

The invasive stinkweed hasn't yet leapt to the north side of New River Mesa. The yellow blossoms covering the slopes of North Mountain are mostly brittle bush blossoms.

Farther to the east is Red Mountain. True to its name, it remained barren of the yellow blossoms covering most of the hillsides around us.

Once part of the historic upper T-Ranch, the area still shows evidence of its history. An old catch pen thick with hare grass and common mallow begs to be photographed.


An interesting pale pink thistle greeted us in several areas. Below, a thistle poses cooperatively in front of North Mountain. Kudos to John Barto for identifying this as a New Mexico thistle.

One of the earlier-blooming cactus, the hedgehog, is already open for bee-business with its fuchsia blooms.  Naturally, having a new toy to play with, I needed to experiment with filters.


The Indian Paintbrush - firecracker-red blooms popping out of the backdrop - are always a visual treat. 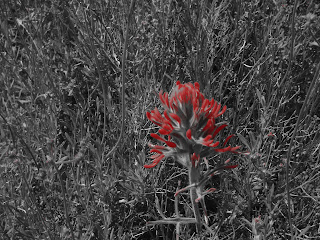 The Coulter's lupine is a toxic beauty, containing alkaloids that can poison livestock. Commercial wildflower seed medleys often contain lupine seeds nonetheless for the sake of their gorgeous purple blooms. Distinctive for their star-like leaves, they line roadsides this time of year. Corrected from "Wyeth's Lupine" courtesy of John Barto, who also tells us that despite toxicity to cattle, the Coulter's Lupine is a favorite of the Sonoran Desert Tortoise.

Below is a type of legume - per John Barto, it is a common pink fairy duster.

During snake season, everything with the slightest serpentine shape gets your attention. The root protruding from the rocks below got my attention. Guitar Guy thought it amusing to make a buzzing noise as I stepped forward to snap a picture.

Near this distinctive peak, a couple of men on mountain bikes stopped to ask us local information. They'd bicycled from Fountain Hills via Seven Springs. Having driven through to Seven Springs from Table Mesa a couple of years ago, we knew what the road was like. I asked, "How was the road?" The taller rider paused for effect and then simply said, "Gnarly."

Already footsore by the time we met the cyclists, I found increasingly more reason to stop and photograph the landscape as Guitar Guy forged ahead. As I trudged slowly uphill, he called out: "Come up this far and you'll be rewarded!" For a moment, visions of a cold beer flickered into my imagination. Although the beer didn't materialize until we returned to civilization, I was indeed rewarded when I reached the top of the hill and could see a view of Gavilan Peak - which we can see to the west from our own backyard - in the distance.

Gavilan Peak, often referred to by older locals as "Twin Buttes" or "Twin Peaks," once served as a landmark along the old stagecoach road from Prescott to Phoenix - now the Old Black Canyon Highway.

Despite the competition of their showier, more delicate wildflower cousins, the saguaro never fail to impress. Today's puffy clouds and bright blue sky made a stunning backdrop.

Atop a peak near the quarry is a cross, barely visible, erected by persons unknown.

Copyright (c) 2017 * This content, including photographs, may not be reproduced without the express permission of the author * Links, however, may be freely shared and are appreciated! * Thank you for liking, linking, sharing, forwarding, Tweeting, and otherwise helping grow my audience * Most of all, thank you for stopping by! * Photographs and licensing are available for purchase: marcyjmiller06@gmail.com