Black Canyon City is a community with a surprisingly rich history - so rich I'm midway through the research for two books on the subject. Settled by miners and those who supported the mining operations, the town's past boasts stagecoach robberies, turn-of-the-century murders by highwaymen, felons and fugitives by the dozen, and unthinkable tragedies. The town's history is diverse; bring together miners, ranchers, homesteaders, and the occasional hermit, artist, and novelist, blend in quirky places and people, and toss together with the daunting forces of Arizona's weather and you're sure to have interesting tales.

The townspeople today not only honor that history with the Old Cañon School Museum and its overseers from the Black Canyon Historical Society, but by cherishing and protecting many historical sites on private property such as several old homesteads and, notably, the ruins of Jack Swilling's stone house.

It's the perfect site to convene a gathering for Arizona history enthusiasts - and the authors who write on the subject. So irresistible, in fact, we're doing just that on December 3rd, 2016 at the First Annual Cañon Arizona History Book Festival.  We've invited several authors who represent some of the more unique and surprising aspects of the state's history to join us at Black Canyon City's Heritage Park from 1:00 to 3:30 in order to sign books and talk history with visitors.

A few of us (like myself) who've written historical books for Arcadia's "Images of America" series will participate.  If you had the good fortune to grow up in the valley in "the good old days," you likely have happy memories of the amazing Legend City - a unique theme park that boasted western-themed rides and setting.  John Bueker, author of Arcadia's "Legend City," will be on hand. Mr. Bueker also maintains a popular website on Legend City.

If you've driven the iconic Apache Trail, you'll want to get a copy of Richard Powers' book, also in the Arcadia series.  We are pleased Mr. Powers will be there to sign copies.  So will Jerry Cannon, structural engineer and author of "Arizona's Historic Bridges."  Mr. Cannon inspected the old I-17 bridge across the Agua Fria River at Black Canyon City after its collapse in 1978; I'm covering that tragedy in a chapter of my own upcoming book. I'll be there, too, of course - signing copies of "New River."

Reflecting the diversity of our state history, David E. Brown will be on hand to sign copies of his books on the history of Arizona's wildlife and game management, including "Arizona Wildlife:  The Territorial Years 1863 - 1912."  Mr. Brown is a retired biologist and adjunct professor at ASU in addition to his work with Arizona Game and Fish Department.

Many old-timers and long-timers of the valley will fondly recall Jerry Foster, our pioneering pilot for 12 News in his news chopper Sky 12.  Jerry is Arizona history and was on-scene and directly involved in many of the biggest stories in the state back in the day. Jerry will join us to sign copies of his book, "Earthbound Misfit" along with Dee Dees, his co-author.  Dee will also sign copies of her book on writing your own life story - "Write Your Life Story in 28 Days" - for those who want to document their personal histories or work with others on doing so. Interested in writing oral histories? You may find some valuable information in Dee's book.

Black Canyon's own Michael Sandford will sign copies of his books, which include the history of the one-time homestead and long-time restaurant Rock Springs. Rock Springs Cafe, renowned for its pies, was originally the homestead of the Warner family.

We'll have live music, too - Mr. Russ Lane will surely please with his covers of country favorites.  This is a free event, by the way, music included!


In case of that rare day that we don't have user-friendly weather, we'll move our outdoor event indoors. Don't let a little drizzle stop you from coming out to meet some amazing authors, fellow history buffs, and to do some Christmas shopping for the Arizona history enthusiast in your life!  Signed and personalized books make thoughtful and unexpected gifts.

Heritage Park is at 33955 Old Black Canyon Highway right on the main drag in Black Canyon City.  Take either exit off I-17 into town. You'll see Heritage Park on the east side of the main road, across from Nora Jean's Coffee Kitchen. (They have great food and coffee at Nora Jean's, in case you bring your appetite.)

Please support local history and the arts. Come on out and visit with us. The event will be followed by a stargazing event, also at the park. Arrive early and enjoy a leisurely walk around the pond, stop in at the museum, and make a day of it!

For twenty five years a U.S. Cavalry post in Arizona territory, on April 10, 1890,  Fort McDowell transitioned to its role as a reservation for the Yavapai people. The government allotted the reservation more than 25,000 acres of land straddling the Verde River. The Yavapai farmed the land, eking out a living from crops and cattle, and formed a stable community in the river-fed desert northeast of Phoenix.

As the population of the now-state of Arizona grew, the need for water soared. By 1968, officials planned construction of a mile-long, billion-dollar dam to create a reservoir for the much-needed water. The dam - to be called Orme Dam - would offer flood control as well as a recreational lake. Backed by the Arizona Republic, influential Mayor Margaret Hance of Phoenix, and - at least initially - powerful politicians such as Senator Barry Goldwater, the dam would have had dire consequences for the Yavapai Nation. Over two-thirds of the reservation would be inundated, wiping out the critical Yavapai farm, ancestral burial grounds, bald eagle habitat, archaeological sites, and basically an entire community. The Yavapai were offered over 33 million dollars and 2,500 acres of land in exchange for leaving their homes and yielding their land. They refused.


The Yavapai people organized a lengthy - and ultimately successful - battle against the dam. Banding together to protest, they raised funds to send representatives to Washington. They participated in a three-day march to the state capitol in Phoenix. They convinced Senator Goldwater, Senator Dennis DeConcini, Representative John J. Rhodes, and other key Arizona politicians to back alternatives to the dam - and in November, 1981, Secretary of the Interior James Lee Watt announced the plans for Orme Dam had been withdrawn.

Today's Orme Dam Victory Days rodeo and PowWow annually celebrate the Yavapai victory over what would have been the sure destruction of their culture. Open to the public, the All-Indian rodeo brings top-ranked cowboys - and cowgirls - from not just distant corners of the United States but from Canada as well.


This bronc was particularly wild, eventually slamming his rider into the fence a split second after I took this photo. The cowboy was not seriously injured.

Rodeo royalty serve not only as ceremonial figureheads but also as working members of the rodeo event staff, ushering livestock from the arena.

We were honored to join the Yavapai in their festivities today. All-Indian rodeos have grown to be my favorite rodeos for the community pride, the laid-back atmosphere, the inclusion of women's roping events, and the darned good cowboys and cowgirls who participate. 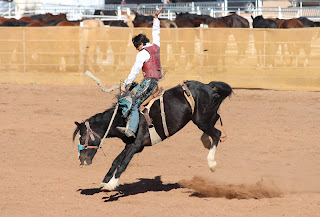 The livestock - from the rope and barrel horses to the rough stock and even down to the last calf - were particularly healthy-looking, gorgeous animals, bright-eyed and glossy. 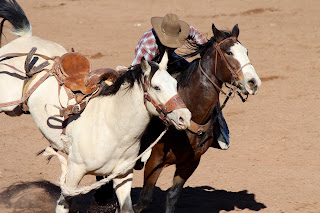 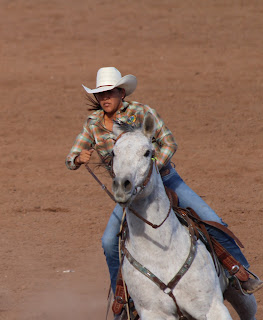 The cowgirls rode hard. The cowgirls-in-training cheered them on and charmed the rest of us. 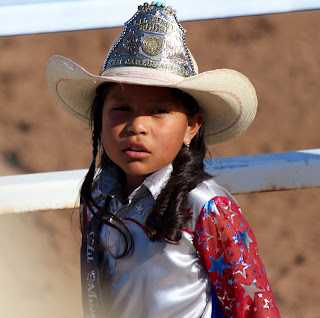 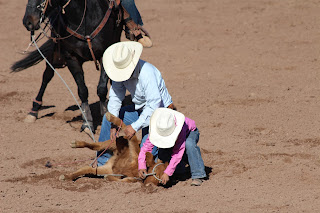 Rodeo is a family event and everyone in a rodeo family - from the elders to the toddlers - are involved. The young cowboy in the photos above and below already has a job releasing the calves from the tie-down roping event. 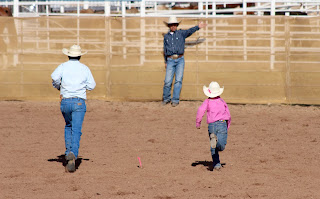 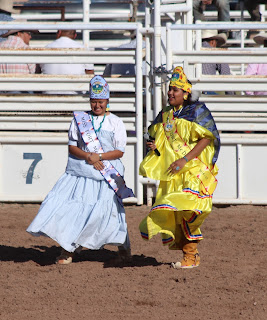 The two gorgeous girls above are Fort McDowell Royalty, Miss Fort McDowell Makayla Doka and Junior Miss Fort McDowell, Tara Smith.  Miss Doka grew up in a rodeo family - and she is the descendant of the late Robert Doka, who served the United States as a U.S. Marine in Korea before dedicating the remainder of his life to serving his community as police officer, tribal chairman, and one of the leading warriors in the fight against the Orme Dam.

The Orme Dam Victory Days festival is held every November in close proximity to the anniversary of the announcement the Yavapai had triumphed against the Orme Dam. Don't miss it. Plan on spending a day - not just at the rodeo, but make time to watch the gourd dancers, enjoy a Navajo taco, ride the carnival attractions, and shop the native crafts located near the PowWow tent - all with the sweeping backdrop of Four Peaks to the east.

Copyright (c) 2016 Marcy J. Miller * All rights reserved * No part of this content, including photographs, may be reproduced without permission * Links, however, may be freely shared and are appreciated * Thank you for linking, liking, loving, sharing, forwarding, tweeting, +1ing and otherwise helping grow my audience * Most of all, thank you for visiting and for sharing my love for this amazing state and its incredible people.
Posted by Marcy J. Miller at 10:18 PM 1 comment: