"We are so fortunate," I remarked to my other half. "Most people never have the chance to do the simple thing we're doing right now: hiking up a little peak to see petroglyphs. We're even more fortunate that we appreciate being able to see them."  (In all honesty, I should add that as I age I'm triply fortunate to still be able to hike up that gentle little peak.) Today started out with a sprinkle and the expectation of more rain. Rather than get the horses out, Russ suggested a hike to the peak we dubbed "Petroglyph Peak" a mere three miles from our back door. I'd ridden by this particular little peak many times but never climbed to the top where, over a thousand years ago, the Hohokam scratched out simple but remarkable images in the malpais rock.

We snuck Earl, our best hiking dog, away from the jealous pack and hit the trail. In just a few yards we were in the Tonto National Forest and in what was once part of the vast T-Up T-Down cattle ranch.

Here, many of the landforms have no official name on the topo maps. Some have been assigned alpha-numeric designations by archaeologists; some have locally-given names. Many, Russ and I have named just as settlers did a hundred or more years ago. Above is "Saguaro Ridge" with "Horseshoe Mountain" in the background - at least, that's what we call them.

Our ever-loyal McNab, Earl, poses atop what we call "Chalk Mound" above - a flat, dusty clearing where the caliche bed is exposed.  In the background is the mesa properly known as Black Mesa.  Once, it was called "Cook's Mesa" for an influential early rancher and sheriff, W.W. "Billy" Cook.

As we reached the trail up Petroglyph Peak, the ridge of Horseshoe Mountain is on our right. Russ - our primary namer of spiders and landforms - dubbed it that for the way the craggy mountain forms a horseshoe shape around a piece of lowland.

As we topped the small peak, the variety and clarity of petroglyphs stunned me. Several boulders boasted numerous etchings. They clearly depicted much of the area wildlife, among other images either abstract or symbolic. The scorpion, below, is familiar to anyone living in our area.

The image below is arguably a Gila monster - or a gecko - as evidenced by the fat, stubby tail.
Both are in residence here: the venomous, lethargic Gila monster perhaps not greeted as enthusiastically by some desert dwellers as the innocuous, chirpy, inoffensive gecko. I love seeing either - but am always particularly thrilled by a Gila monster sighting. More dangerous than the average rattlesnake, they're also much more difficult to goad into biting.


The impressive selection of etchings below includes several canids and, just right of center at bottom, a bighorn ram. 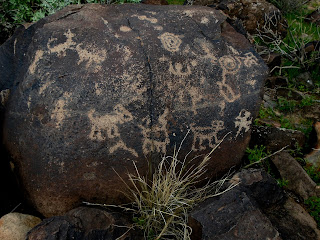 The display atop Petroglyph Peak boasts several buck mule deer with impressive racks.  We rarely see them anymore due to the hunters and recreational shooters in the Tonto. They're smart enough to take refuge nearby in the Cave Creek foothills, as have the javelina.

Humans have made their presence known not just to the real wildlife but to the rock art wildlife as well.  One of the most stunning displays on Petroglyph Peak has had a large chunk of the boulder pried away and removed.  If you look closely you can see the lighter grey tool marks on the edge where someone used the natural fissures in the rock to insert a prying tool of some sort.


Perhaps, with so many years of outdoor explorers such as myself visiting the site, we shouldn't be as amazed at the fact someone would destroy such a treasure as we should be that any of the petroglyphs remain at all - human nature being what it is. It was the norm, when I was a child, for outdoorsy people to go artifact hunting, thinking nothing of collecting pottery, petroglyphs, and smaller finds such as arrowheads and sherds. The land seemed infinite and the relics seemed endless in abundance. Now the world has grown smaller and awareness has evolved.


From the summit of Petroglyph Peak, the views of nearby landforms are as impressive as the close-ups of rock art. Above is another aspect of Black Mesa.  Below, Gavilan Peak to the west is ever-identifiable.

As I often do, I handed the camera to my kind and loving husband. "Does Black Mesa make my butt look big?" I asked. He motioned me to step aside. "Move over. I can't see the mountain," he replied.

We hiked back along Cline Creek and down to Cline Well, where once T-Ranch cattle were branded and cut. The site of the old windmill and tank is still clearly visible, although both have long since been removed. The barbed wire catch pen is damaged but still photogenic.

We are fortunate. Blessed, even. We live in a place with postcard-perfect views in most directions where, most of the time, you can still hear the ground beneath your feet. I'm thankful to be able to share it here.

Copyright (c) 2017 MJ Miller * All rights reserved * No part of this content, including photographs, may be reproduced without the express permission of the author * Links, however, may be freely shared * Thank you for sharing, liking, linking, +1ing, tweeting, emailing, sending by carrier pigeon, and otherwise helping grow my readership * Most of all, thank you for stopping by and reading!