A Day of Champions, Massacres, and Massacred Music 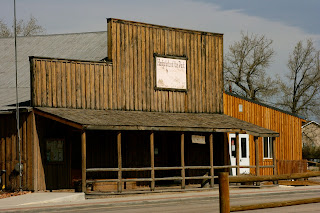 Not only are the Wyomingites friendly and courteous, but there aren't too damned many of them, either.  The population is just the way I like it:  close to 1.5 million cattle, and under 600,000 people.  That means miles of ranch land, places where you can still hear your own footsteps, air that's worth breathing.

Twenty-six miles south of Kaycee, we pass through serene, gently sloping hillsides populated by antelope and livestock.  I don't bother taking too many photos of antelope; they're like our own cottontail rabbits, always a joy to see but so prevalent that you just don't think of grabbing the camera every time you pass a congregation.  This land is so quiet and tranquil it's hard to imagine the violence that swept it during the range wars of the late 1800's.  This is Johnson County:  site of one of the most ruthless, brutal and downright dirty range wars.  Powerful cattlemen, in a horrendous turn of events, hired assassins such as Tom Horn and Frank Canton to come in and exterminate the homesteaders, whom they designated with great recklessness as "rustlers."  That topic, of course, is be food for a future article; even today, the details are heartbreaking and frightening.  This west wasn't just cowboys-and-Indians friction:  it was cowboys versus cattlemen, Mormons versus Gentiles, foreign interests versus local homesteaders, the powerful against the oppressed. 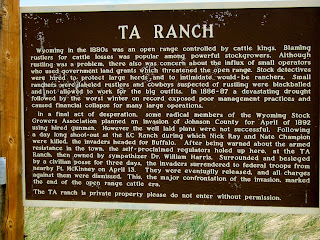 We pass through the area where John Tisdale, one of the early casualties of the Johnson Country troubles, was ambushed.  Tisdale was assassinated in Haywood's Gulch on his way home to his family after buying winter supplies in Buffalo.  The suspected killer was Frank Canton.  Roadside monuments mark the site of the TA Ranch and the Tisdale Ranch.

Before reaching Kaycee, we cross the leisurely trickle of water called the Powder River.  This land -- the Powder River Country -- was the hunting grounds of the Plains Indians -- Sioux, Cheyenne, Arapaho.  Although the once-abundant buffalo are gone, we see an impressive amount of small, fat deer, untroubled by our presence.  The Powder River country is also the chosen land of one of my favorite country singers, the late, great bareback rider Chris LeDoux.  I'm eager to see Kaycee, where he bought his ranch and raised his family.  He loved the land enough to stay there rather than live the Hollywood or Nashville lifestyle that most certainly beckoned him, and some of his lesser-known songs are ballads of the Johnson County War, and tributes to his "Powder River Home."

Chris was the real thing.  A bareback champion by the time he was 16, Chris rodeoed successfully for years before turning his focus to singing his ever-upbeat, joyful songs of rodeo and western life.  In the center of Kaycee is a fittingly beautiful tribute to such a man:  a quiet small-town park shaded by flowering trees, a small rock waterfall, flower-lined paths, and a greater-than-lifesize bronze sculpture.  Titled "Against These Western Skies," it depicts Chris riding the bucking horse, Stormy Weather, to the championship -- set on a guitar-shaped base.  Naturally, there's a huge, life-loving grin on LeDoux's face in the sculpture.

It's a stunning drive through miles of stunning ranch land to the Hole in the Wall area of Bighorn Basin.  Although the road covering the last five or six miles to the outlaw cave that sheltered Butch Cassidy and his confederates is inaccessible to the public, it was evident that they had loped past the same red bluffs we admired.  Buttes such as those shown here provided an advantage for the gang to ambush any pursuers. This is outlaw country, frequented by robbers and hired guns -- and the bodies of those they slaughtered.

Nate Champion, one of the early victims of the Johnson County War, was murdered in a barn between Kaycee and Buffalo, where he bravely holed up against the "Invaders" -- Texans brought in by the all-powerful Wyoming Stock Growers' Association to kill off anyone even remotely allied with the rustlers.  Nate, during his hours fending off his attackers in the KC ranch cabin, kept a journal of his final moments.  Nate's notebook, unlike himself, survived as the Invaders set fire to the cabin, gunning Nate down as he fled the flames.


As we drive, we happen across the quiet Willow Grove Cemetery in Buffalo.  We stop to walk around. No one else is within sight; we have the acres of marble monuments to ourselves.  There are no tourist-oriented signs announcing the famous (or infamous) grave sites here.  I flip through an alphabetical list of those interred, and to my surprise I find Nate Champion.  The courageous man lies beside the grave of his brother, Dudley.  Nate died a horrid death -- but his place of repose is serene.  Nearby, the Tisdale family plot is shaded by massive trees.


We soon venture to Fort Phil Kearny, from which the soldiers who fought in the Fetterman Massacre and the Wagon Box Battle were deployed.  At the interpretive center, the gregarious woman who greets us asks where we're staying.  When we tell her we'll be at the Occidental Hotel in Buffalo, she warns us not to talk to the pig-tailed woman there.  "If you talk to her, before the night is through she'll be asking you for money!" she cautions us.  She gives us a nutshell narration of the events of the battles, and we tour the place where the fort had stood.  No traces remain; after it had been rendered inactive, it was burned to the ground by the Indians.  Not it is but a vast grassy expanse, dotted with brass placards and site markers where corner-posts had been.  Here, Carrington's troops lived, trained, and fought hard, and too many met an early grave.  The countryside is vibrant green, the fort nestling in a valley surrounded by hills and peaks, watered by a stream.


Capt. William J. Fetterman led 80 men to their death while attempting to aide an embattled wagon train on the Bozeman Trail; three were later killed in the battle at Wagon Box.  We walk all the sites, just miles apart.  Wagon Box overlooks a stunning vista, while the Fetterman Massacre site is on a ridge with sublime hills, valleys, and views of the Bighorn Mountains.  It is almost surreally beautiful.  We walk the path the troops had taken in both pursuit and retreat during the battle.  Rain drops on us and the wind kicks up; I am shivering wind-whipped, and my teeth are chattering.  Daunted, we sit in the Jeep for a few minutes deciding whether or not to venture out -- but having come so far, who would pass the chance to walk on actual remnants of the bloody Bozeman Trail?  It is a walk of maybe two miles, with markers indicating where the key points of the massacre had occurred.  The rain makes the scene more poignant.


Abruptly the wind stops, the clouds part, and we're treated to the most seductively lovely sunny afternoon, there on that bloody ridge overlooking indescribably beautiful hillsides.  A pair of herons makes an odd chuckling noise nearby, too shy to be properly photographed.

We are warm by the time we return to Buffalo.  As we unload the Jeep on the roadside, the woman from the fort happened buy in her blue pick-up and yelled out the window, "Remember, don't talk to the woman in the pigtails!"  As we approach the hotel, lugging our clothes, an odd woman resembling Liz Taylor is seated at a sidewalk table; she gives me a cold, venomous stare as we walk by.  The woman in pigtails greets us at the front desk and gives me a quick synopsis of the effort that went into renovating the hotel.  She is the owner.  She tells us we're in luck tonight:  there's a bluegrass jam in the hotel's saloon, and the state's PBS is there filming it.  It fills up fast, she warns -- so get there early; she'll reserve seats for us.

Attentively renovated to resemble its original western appearance, the Occidental boasts not only that Butch Cassidy slept there, but that Owen Wister's Virginian ultimately got his man there.  The restaurant attached to the hotel is called the Virginian, appropriately.  We pass it up over Russ' shock at the prices on the menu, and instead stop at Up in Smoke, a barbecue joint up the street.  There, a sweet and perky waitress serves us the most expensive (and least worthy)  BBQ we've ever eaten. We each have a beer and a sandwich and a small dish of ice cream, and I can't help but laugh at the $50 tab.  It's just plain funny that it nearly costs as much as the upper-crust fare at the Virginian may have.

The pigtailed woman is right: the saloon is filled with eager locals, including the Liz Taylor clone, for the bluegrass jam.  The voices aren't great, but the crowd spirit is enviable.  During a particularly painful yodeling session, Russ smiles and says, "There IS something worse than bagpipes!"   We retire early, making our way up the creaky stairs to our "Rose Room." Russ glances around and comments, "It's like being at my grandmother's."  He's right:  there are cabbage rose patterns, brocades, quilts, gilt frames, and porcelain ... everywhere.  The room, as the proprietress had informed me, was once two brothel rooms, which did not have bathrooms; she had done significant remodeling to provide each room with a bathroom.  The main room is spacious, but the bathroom cramped and bath-tub free.  There's not quite enough room in the shower stall to shave a leg.  We don't mind; we're happy enough to be in a hotel that has the same feel it likely did when dusty travelers passed through over a hundred years ago, in the company of the ghosts of frontier whores and horse thieves.

It has been an easy day for driving; 240 miles, and every inch boasting gorgeous scenery.