One of the great advantages to a road trip rather than destination-style travel is the emphasis on the path rather than just the end-point. Instead of a goal-orientation, there's a pleasure in the process that stays with you throughout the entire trip. To enhance that, we tried to avoid freeways as much as possible while still recognizing the limitations of eight days' time. We also adopted a leisurely pace, for the most part -- and that meant stopping at roadside monuments, visiting places not on our already-flexible itinerary, and pulling over frequently to take photographs.

It wasn't until we'd reached Monument Valley that my camera began to live on my lap, and from that point forward, I juggled three cameras -- my beloved Canon Rebel, my smaller Canon Powershot, and the camera built into my iPad. Having just received my new iPad as a birthday gift, I was constantly aware of the risk I was taking while waving it out the window to snap a shot while in motion -- let's just say it's not streamlined, and I had visions of it taking flight. I'm glad I experimented with it rather than sticking to my trusty Rebel. The iPad delivered some unique photographs reminiscent of muted water colors, while others were so vibrant as to seem more like pop art.

Russ was quite patient in my demands to stop, make U-turns, and otherwise indulge my need to take the same shot with three different devices. In many ways, I've been bad for Russ: for one, I don't think the man really learned to swear until hanging around me. On the bright side, when he does swear, it's often to great comic effect. I can't print a lot of his Russisms, but I'll share what I can.  He started off our sight-seeing with a remark that was dead-on: as we entered San Juan County, Utah, with the surreally beautiful rock formations dotting the desert, Russ gazed at the landscape and said, "It's going to be a great vacation. Look at all this shit."

At a gas stop on the reservation, I talk briefly with a woman walking a wet border collie. She tells me, "She just got to swim in the San Juan River!" A few minutes later, we cross the river ourselves. I pay it little attention; I don't yet realize that we'll be in the company of so many great rivers on this trip, and I neglect to take its picture for the sake of future comparison.  Rivers, to we who were born in the desert, are impressive things.


Here's an early indicator of the texture of our trip -- multi-colored strata of weather-beaten hills.

This is, I think, one of the most-photographed of rock formations in the state.  I had to do my part.

Before too long, I was rock paparazzo.  I stalked rocks and photographed them.  These particular formations, being so near to a heavily-traveled highway, are something of the Lindsay Lohans of the rock formation world -- instantly recognizable and endlessly photographed -- but they're not quite as hard looking, and they've aged much better.

We stop for "dunch" in Monticello -- a late lunch, early dinner meal at a log-cabin restaurant called the MD Cowboy Cafe.  The sweet, Cleopatra-eyed waitress brings Russ his burger, bud with the verboten cheese on top.  Heaven forbid Russ should eat cheese.  The waitress is ever-apologetic, but Russ nonchalantly peels the cheese off like so much Velcro and tells her, "This is not my first cheese rodeo."  The town itself is quaint four-square houses and green fields with a smattering of glossy, well-pastured livestock.  It's unassuming and tidy and has a comfy, homey feel.

We pass "Hole in the Rock."  Russ, always the eloquent admirer of the picturesque and the kitschy, says, "I was in there one time.  It's just a cave and a gift store."  The photo above is as close as I got.  The photo below is a much more authentic hole in the rock.

And then we pass hours in which I couldn't so much as type a word in my travel notes ... because we're driving on Highway 128, on the west edge of Arches National Park.  The photographs can't hope to capture the beauty of it.  To the east, the La Sal mountains peek through, snowy and alpine; in the foreground, brick red and magenta cliffs.  To the west runs the Colorado River, pristine beauty broken only by the occasional rafter and kayaker.

This isn't our first sight of snow for the day, but it is the grandest.


This is the point where I should just shut up and let the pictures speak for themselves ...


Although it's hard to wrangle the 1,400 photos I took on this trip, I can at least say with confidence these were all taken on the same afternoon.  I was understandably giddy with the varying colors and intensities.  Seeing these landscapes and knowing how pathetic I am at painting is a special sort of humiliation -- they beg to be painted, but competently.

Above is an example of an iPad photograph.  The iPad did the painting for me on this one, interpreting the mountains as some sort of day-glo poster.

The typical view was more calming on the eyes ... warm plateaus, green and yellow brush, and those stunning snowy peaks against a desert sky.

Eventually, we break through the north end of the canyon.  Red cliffs fade away into green bunny hills.  They look like something from a children's picture book, gentle and beckoning.  We soon enter Colorado. 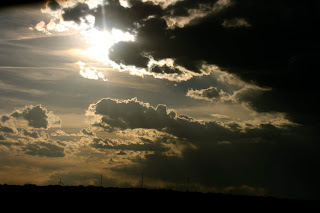 Our day ends in Rifle, Colorado:  598 miles and a thousand bugs on the front grill later. 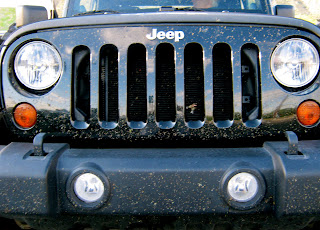