Lungers and Consumption: How Tuberculosis Shaped the West

Any fan of blood-and-thunder novels (or the movie, Tombstone) can tell you that Doc Holliday was known as a "lunger" and was slowly wasting away due to consumption.  Most of them can even tell you what "consumption" is:  pulmonary tuberculosis, also known as "phthisis."  Few, though, recognize the sheer prevalence of tuberculosis on the newly-settled west, or the myriad ways TB influenced western history.

The way writers about Doc Holliday and his hacking, blood-producing cough would have you think, Doc was a rarity, known almost as much for his chronic TB as his violent tendencies.  They make a big deal about his condition, and use the word "lunger" (slang for patients with TB in the lungs) as if it was a unique term for himself and the few like him.  TB was, of course, a big deal to Doc himself:  highly contagious, often fatal, and rarely curable, it was a miserable and devastating disease.  It was so common, though, it was referred to as "the white plague" for the shocking numbers of casualties it produced.  It was the most common cause of death by disease during the 1700's and 1800's, and well into the 20th century was a leading cause of death.

Was the west really that much different from the rest of the world in having to contend with virulent TB?  No.  What was different was that during the sanitarium movement beginning in the 1800's, doctors urged patients to seek temperate climates with fresh and freely-circulating air, where the patient could sleep outdoors.  Although sanitariums were opened throughout the United States (and beyond), TB sufferers were drawn to the open air and warm climate.  It didn't take long before enterprising individuals in the west capitalized on the trend, and began marketing efforts aimed specifically at the consumption patient.

Although tuberculosis had been a major cause of human death for thousands of years, it wasn't until the 19th century that people began to recognize that it was an infectious disease rather than of congenital origin.  They originally believed that people were born with the trait, and would eventually show symptoms.  That, of course, encouraged the spread, as preventative methods weren't adopted during exposure to patients.  Not  until 1882 did a German bacteriologist, Dr. Robert Koch, identify the rod-like bacillus that caused the tubercles to form in various parts of the body.  In addition to the lungs, tuberculosis could invade the bones, the skin, and the lymph nodes -- the now rarely-heard term "scrofula" refers to the latter case.

Once it was suspected that the dreaded disease was communicable, three things happened:  sanitariums became quite popular; sufferers were urged to move to amenable locations; and communities began to react to the threat of contagion.  A 1933 copy of the World Book Encyclopedia states "Many cures have been effected by removal of the patient to a dry, bracing climate, where the temperature is even and sunny days are numerous.  Much emphasis is placed by modern authorities on the value of sleeping and living in the open, and of eating nourishing food.  The ideal place for a tubercular victim is a sanitarium in a healthful locality."

Thus enters the significance of the U.S. west.  Chronic TB sufferers (as opposed to those afflicted by acute forms, known as "galloping" consumption, and who were dead within weeks) packed themselves into trains and stagecoaches and made their way to the southwestern states.  Remote locations such as Castle Hot Springs, Cave Creek, and Indian Hot Springs, Arizona; Colorado Springs and Denver, Colorado; and many others began catering to the "health seeker," as they were often called.  For those who had money, the accommodations were comfortable, if not luxurious.  Sleeping porches became quite common; I wonder if the screened "Arizona room" so common when I was a child actually had its origin in the threat (or reality) of TB.

At one time, one in three people in Colorado suffered TB, and 25% of Coloradans died of it.  Phoenix, Arizona, became a popular landing place for health seekers, and promoted itself as such.  Referred to as a "natural sanatorium," it began to attract not just TB sufferers, but people with asthma and other debilitating respiratory disease.  My own mother, who barely knew one of her brothers during childhood because he was in a TB sanitarium in Canada, came to Arizona as a young adult for her asthma:  these diseases touched everyone in some way, and just as they drove some people apart, they brought others together.  According to Lee Olson in "Marmalade and Whiskey:  British Remittance Men in the West," the Rocky Mountain region was the "most British" part of the United States for a time, thanks to so many remittance men and TB sufferers flooding the area.

Just as one influential physician in Arizona, Dr. E. Payne Palmer, came to the valley for the betterment of his TB, so did a kindred spirit, Dr. S. Edwin Solly, move to Colorado Springs for his own affliction.  Dr. Solly opened a sanitarium to treat affluent patients, and used much of the profits to provide care for sufferers who couldn't afford to pay.

As for the latter, many locales were soon overwhelmed by the pilgrimage of patients who could not afford to support themselves.  According to Bradford Luckingham's "Phoenix:  The History of a Southwestern Metropolis," the Phoenix and Salt River Valley Immigration Commission specifically reminded potential health seekers to bring money.  They very bluntly warned that the valley did not "offer an asylum for indigent people who wish to regain health."  Those who could not afford accommodations erected tents for their own tubercular colony of sorts, and Phoenix responded with a 1903 ordinance against urban camping.  Many of the early residents in Sunnyslope (then, just outside city limits) were, according to Luckingham, poor, tubercular tent-occupants.

Other potential discouragements to lungers surfaced.  According to Lee Olson, Colorado at one time considered passing a law requiring tuberculosis patients to wear bells to warn others of potential contagion.  Meanwhile, as some resorts recruited wealthy consumptives, other resorts turned away anyone with symptoms.  A typical Chamber of Commerce statement (this one, from Tombstone, Arizona) would read "Relief is afforded many afflicted with asthma and bronchial trouble.  Here is where nature offers her best gift of pure and invigorating air which together with good water, the inspiration of the scenery and tonic effect of sunshine is beneficial to the sufferer."  Meanwhile, the posh Ingleside Inn prominently stated that it wasn't a sanitarium, and would not accept anyone with a communicable disease.

Around the southwest, "tubercular cabins," were built.  Patients could avail themselves of the curative fresh air while remaining somewhat isolated.  Today, the Cave Creek Museum in Cave Creek, Arizona, boasts an intact original tubercular cabin -- the last one standing.

Lungers were ubiquitous.  Hattie Josephine ("Jo") Williams Goldwater, better known as the mother of influential senator Barry Goldwater, came to Arizona in 1903 due to her own tuberculosis diagnosis.  Apparently the curative air of Phoenix worked:  Jo lived past her 90th birthday.

Doc Holliday certainly wasn't the only gunfighter to live by the gun but die by the lung.  Doc died in 1887 in a hotel in Glenwood Springs, Colorado, where he'd moved for the benefit of his lungs.  A year later, Jim Tewksbury, who managed to survive his participation in Arizona's 1887 Pleasant Valley War, died of TB.   Bat Masterson's younger brother, James, died in 1895 of "galloping consumption," in Guthrie, Oklahoma.  It was indeed a common cause of death and a powerful influence on the American west -- economically, demographically, developmentally, and -- most tragically -- personally. 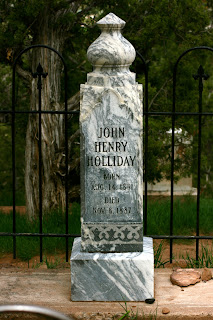 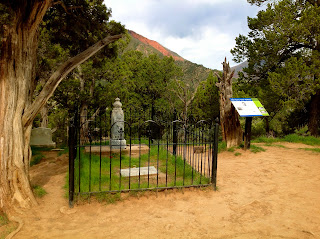 Doc Holliday's marker in the Glenwood Springs cemetery.  It is not, however, placed over his grave.  Having died alone and destitute, he was likely buried in the Potter's Field portion of the cemetery.  Nonetheless, Doc rests in a breathtakingly beautiful location on a hill surrounded by mountains and shaded by tall trees.  Photos copyright (c) 2013 by MJ Miller