I was always vaguely aware of Tom Mix.  I'd grown up hearing his name, now and then, and I knew he was a movie cowboy.  I'd  heard Dad talk of the monument on the backroad to Tucson, where Mix lost his life in a car wreck.  I stopped there, once, on the way back to the U of A.  I could call up an image in my mind of a handsome man in a distinctive white hat (meaning, of course, that he was a good guy) who had an essence of tough good-naturedness -- much like my Dad.  And, of course, I knew that Tom's horse was a flashy tall horse with a lot of chrome, and his name was Tony.

That pretty much summed it up, though.  I grew up with Dad's favorite black-and-white B-grade westerns perpetually on in the background, but I never saw the silent westerns that Tom dominated.  My childhood cowboys, on the occasions they were chosen from film rather than reality, were John Wayne, James Stewart, and Gary Cooper, not the previous generations.  Mix's career began in 1909 and ended in the mid-1930's, a period when most of "my" cowboys were still in short-pants.  I hadn't sung along with Gene Autry or Roy Rogers, or memorized the cowboy code until adulthood.

A couple of weeks ago, just days after the anniversary of Tom's 1940 death, I revisited the memorial for the first time since the 1980's.  Not much has changed in that particular site since then; it's still, for the time being, free of surrounding tract homes and strip malls.  It remains a wonderfully lonely road.  One or two cars passed while we took a leisurely break from our drive; no one else slowed.  The Tom Mix memorial isn't high on the list of travel destinations. 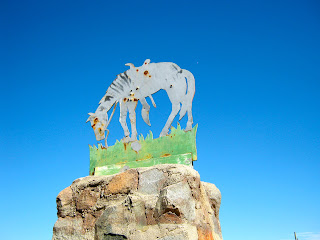 There's a cairn of locally-gathered stone, topped by a bullet-riddled metal silhouette of Tom's horse, his head lowered in mourning; a shaded picnic table; and a small pull-out for parking while enjoying a roadside meal.  Tom's death site is just yards away, in the wash where his yellow Cord Phaeton convertible came to rest after a high-speed roll-over.  The wash is now called "Tom Mix Wash."  (That brings back a couple of memories of riding in the prairies of New Mexico, where it seems every wash was named after a cowboy who'd died while riding his horse there.  Sometimes while riding, I think of that and hope I don't get a wash named after me.)

I never wanted to write about movie cowboys; that's what True West magazine is apparently for.  But there's something about Tom Mix that stands for the westerner, if not the west.  Tom's career ended as the silent movies faded to black; he was one of many great stars who didn't transition to talkies.  What's more evocative of the western spirit than the old cowboy, challenged to keep up with a changing world and new technology that threatens the old way of doing things?  And Tom was a cowboy.  Unlike John Wayne, who thought horses were big, dumb animals and preferred shopping to riding the range, Tom loved horses.  The Tom Mix Museum in Dewey, Oklahoma, has a collection of photos that includes one of Tom with his horse, Old Blue, a rangy, spraddle-legged blue roan.  Tom inscribed on the photo, "In Memory of Old Blue -- the best horse I ever rode, born July 14, 1897, killed Jan. 29, 1919 -- We grew old together."

Tom, born in 1880 in Mix Run, Pennsylvania, grew up around horses, understood them, and worked on a ranch.  He knew how to cowboy, and not just for the film.  Tom could bulldog steers, rope, and ride.  Even his third wife, Olive, could rope and tie (and although I don't know if the others could, but it wouldn't surprise me).  Tom did his own stunts, which, although common to the actors of his time, was something to set him apart from today's movie cowboy.  He earned the roles he played.

One subject any western historian grapples with is the sheer bulk of bad information about historical figures.  Recently, researching Johnny Ringo's life and death reminded me of how suspect even contemporary eyewitness accounts are.  I was surprised to find just about as much misinformation about Tom Mix, despite the relatively modern time of his life and death.  His Hollywood publicists certainly muddied the water with glowing accounts of his western birth and heroism in the war, none of which were true; even his death, which was witnessed by highway workers, was disputed.  It's commonly maintained that Tom survived the single-car wreck, but that when he climbed out of the sports car, a heavy trunk shifted and struck him, breaking his neck.  Other accounts say he died on impact.  Knowing the media's love for the bizarre and gruesome ways of dying, I'm reluctant to believe the "Suitcase of Death," story without further primary research.

Last night, I read in one of my Arizona Almanacs that Tom died late at night.  In fact, he died mid-day, while the road was having construction work done on it.  He'd been up drinking with friends until about three that morning, and was doubtless tired -- not to mention being in a hurry and perhaps fighting that white-line fatigue from driving quiet highways.  He had a ranch in the area, and was familiar with the road.  He likely overestimated his skills at 80 miles an hour in a construction zone.

Some erroneous accounts even stated that Tom was hauling Tony (actually, that would have been Tony II) when the accident happened; I've read that Tony was killed at the same time.  He wasn't, but died a year later.  (Come on, folks, why would the memorial depict a grieving Tony if Tony was dead, too?)

Even Tom's film statistics are disputed.  I've read accounts that he was in 291 films, all of nine of which were silent.  Other sources credit him with nearly 400 films, or a vague "over 300."  At one time, he was the most highly-paid actor in Hollywood.  He and Tony earned over $7.5 million dollars together.  A capable businessman, he ran the Tom Mix Circus for a while; one of my favorite photos is of his daughter (with Olive), Ruth, on a flashy horse next to a Tom  Mix Circus van.  Tom provided glimpses of the vanishing west to his audience similar to the Miller 101 wild west show of the time.  Always classy in his "Boss of the Plains," style Stetson, western-cut sport coat and bow tie, Tom knew how to deliver.  His action-packed films elevated him to prominence over the saturnine William S. Hart, noted an article from 1923; his authenticity put him above Broncho Billy Anderson, whose claims to be a cowboy were disproven by his inability to ride.

Even if he WAS a movie star, you can bet on one fact:  Tom was a cowboy and rancher, and when he dogged a bull, it was the real deal.  That cuts him out of the herd, and in my book, gives him a place as a real westerner. 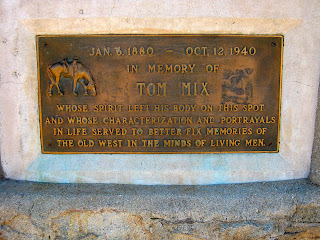